Smartphones are so ingrained in our lives today that it’s easy to forget that the technology is still relatively new. It wasn’t so long ago that marketers lacked a direct route to consumers on the go.

In both business and entertainment, handheld devices have changed the way people communicate with one another, read the news, learn about new subjects and make purchasing decisions. With the majority of all internet traffic coming from mobile devices today, there’s a good chance you’re reading this article on a smartphone or tablet. So let’s take a brief scroll back through history to see how we got here.

Since 1973, net productivity – defined as the growth of output of goods and services minus depreciation per hour worked – has grown by more than 238.7 percent, according to the Economic Policy Institute. Though there are many factors at play, mobile devices have surely made a significant impact on this growth, as they have shortened communication lag times from days and hours to nanoseconds. Furthermore, handheld devices have given everyone access to powerful computational technology that was once restricted to a select number of scientists and high-ranking business professionals.

Here are some highlights of handheld technologies that gradually leveled the playing field: 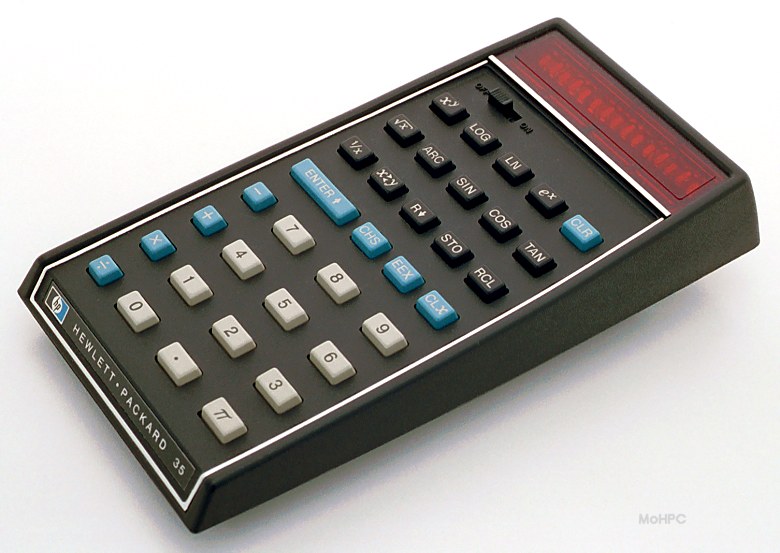 On Feb. 1, 1972, Hewlett-Packard released the first handheld scientific calculator. Though pocket calculators had already existed for a number of years, the HP-35 was the first instance of a mobile device that could perform all of the mathematical operations of a desktop calculator. It could do trigonometric functions like sine, cosine and tangent. 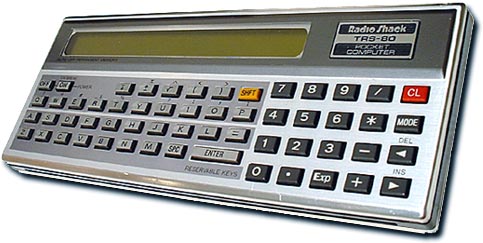 Produced by Radio Shack, the TRS-80 Pocket Computer featured a full QWERTY keyboard and number pad. It could read programs built in the BASIC programming language, which put it well ahead of common programmable pocket calculators of the time. It could also save programs to tape and connect to a dot-matrix printer. 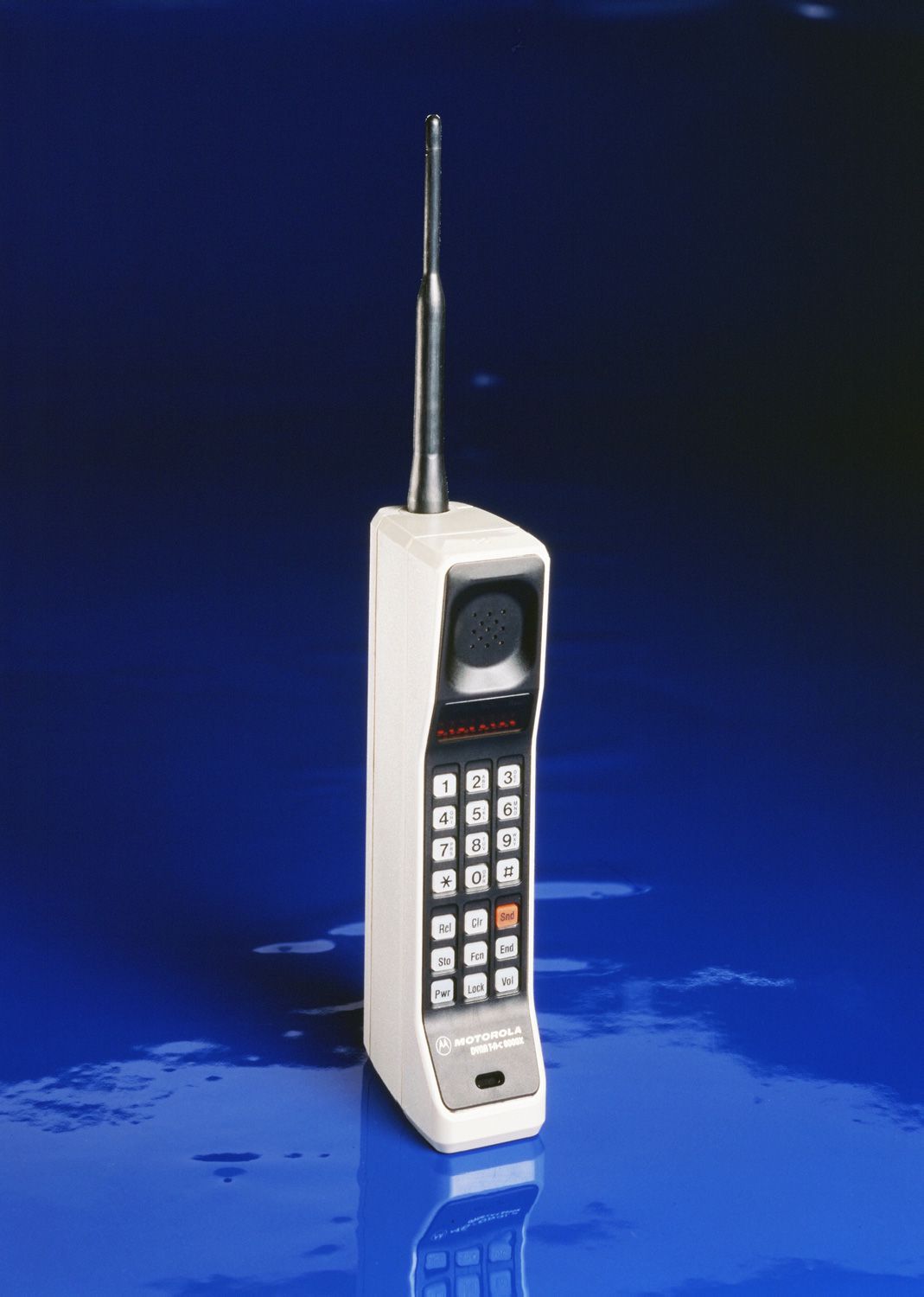 Prior to the release of its first cellular phone, Motorola had produced several car phones that could communicate wirelessly. In fact, cellular technology had been around since 1973, but it took a full decade before a wireless phone could fit in your hand. Even then, you’d need quite a strong arm to hold the 13-inch, 1.75 lb. DynaTAC 8000X. You’d also need a sizable chunk of change to afford the device, which retailed at $3,995 – or about $10,000 adjusted for inflation. 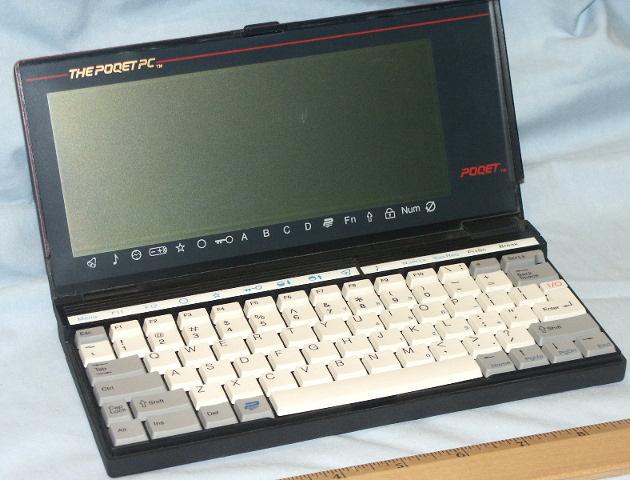 Built on IBM technology, the Poqet PC ditched cumbersome power cables and battery packs for a slick one-pound design powered by two AA batteries. The device featured expandable memory ranging from 32KB to 512KB and you could get an attachable floppy drive from greater convenience. The Poqet PC could hold your entire address book and calendar, as well as word processing software. 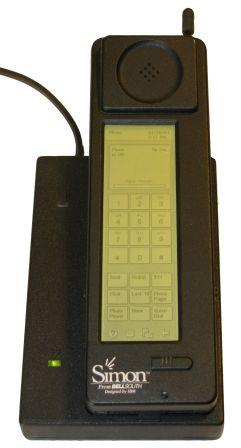 Considered the first smartphone, the Simon Personal Communicator from IBM featured a stylus-based touch screen, email capabilities, a sketch-pad application and the ability to connect to a fax machine. Simon even had a predictive typing feature, which showed the user the next six most likely letters based on typing input. 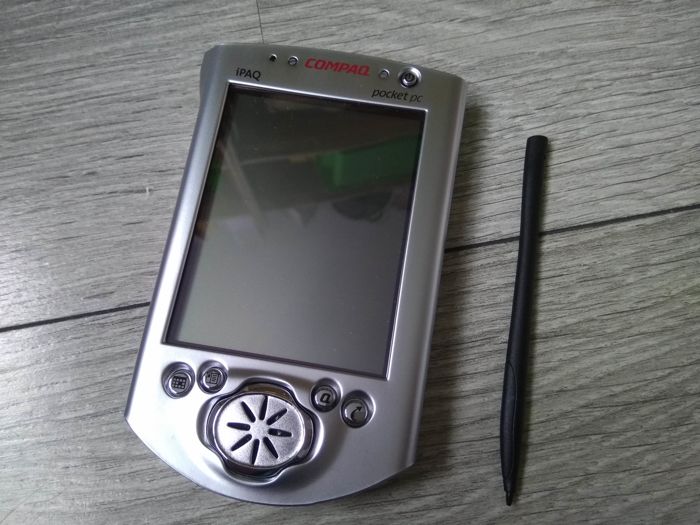 Before the ‘i’ prefix was solely associated with Apple products, HP released the iPAQ personal digital assistant, a slim device that could put a linux-based operating system in your pocket. HP released several iterations between the turn of the millennium and 2009, eventually switching to a fully color screen and the Windows Mobile OS. The iPAQ series offered GPS, instant messaging and upgradable RAM among its many features. 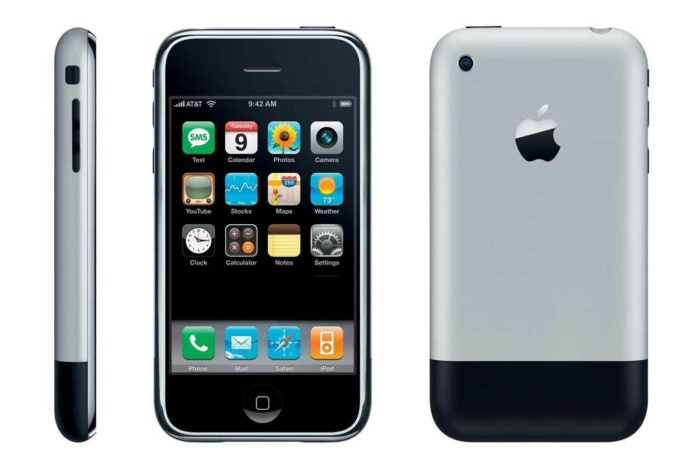 When the first iPhone launched in 2007, it lacked many of the features we associate with the brand today, such as GPS, video recording and even the app store. The second generation added these important capabilities, as well as 3G network speeds – and the rest is history.

With the launch of the iPhone and the subsequent competition with Android and other devices, a new era was born – one rich with possibilities for content marketers who gained a direct line to consumers across the globe. However, something else had to happen to get to the point where people of all walks of life were comfortable using mobile technology. As you may have noticed, the majority of the devices highlighted here are strictly made for business purposes.

To understand how mobile technology got to where it is today, we have to look at another side of the technology: mobile entertainment systems.

While business people in plaid suits and bell bottoms were making calculations with their digital slide-rules in the 1970s, another innovation was taking place in the hand-held device market. Video game consoles were also leaving home, fueling a desire for entertainment that could travel. 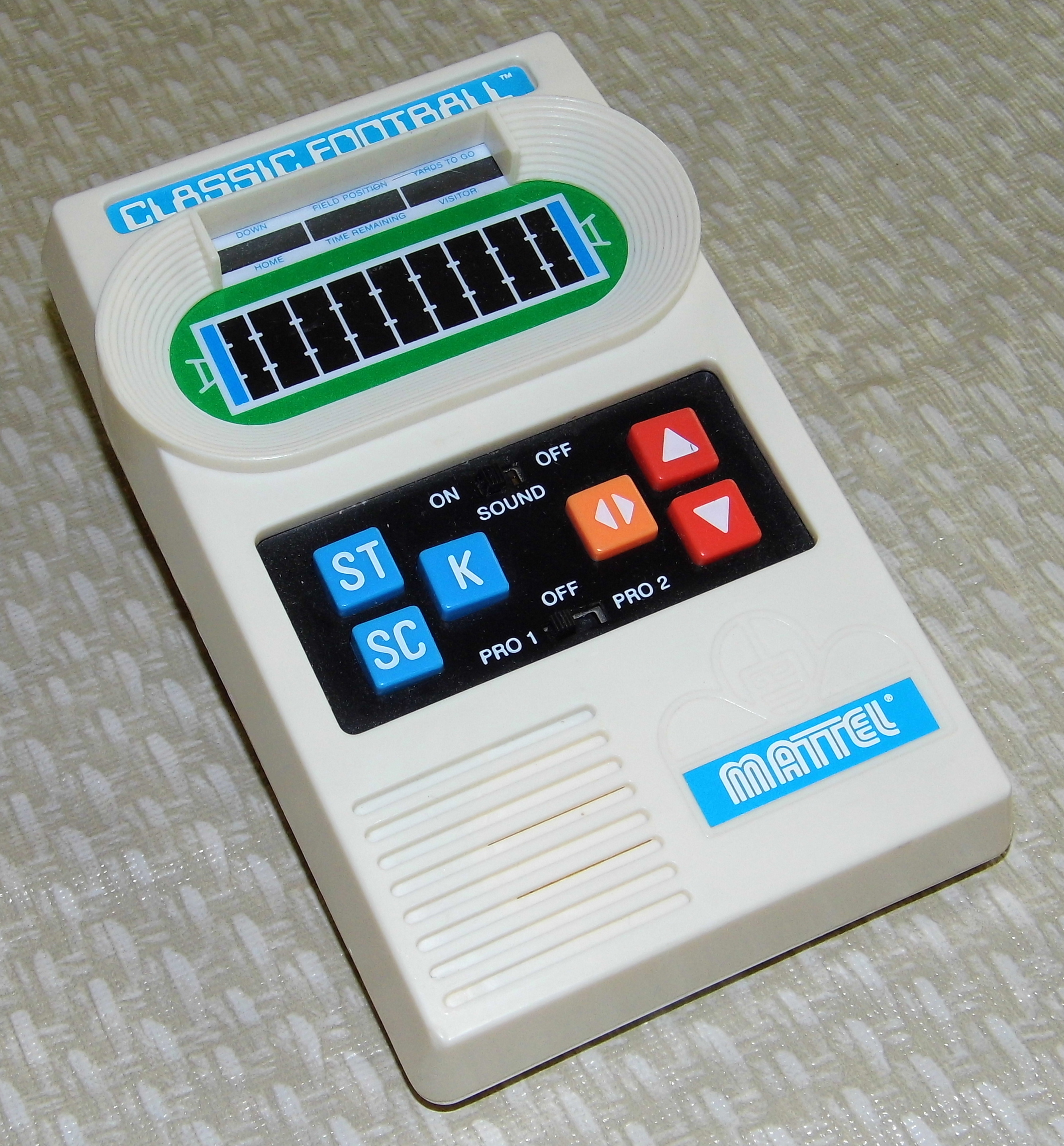 One of the first handheld video games was Mattel’s Football. On this device, football players were represented by red dots that moved toward the player’s character – represented by another red dot. It wasn’t much, but it opened the door to a whole new type of gaming experience. 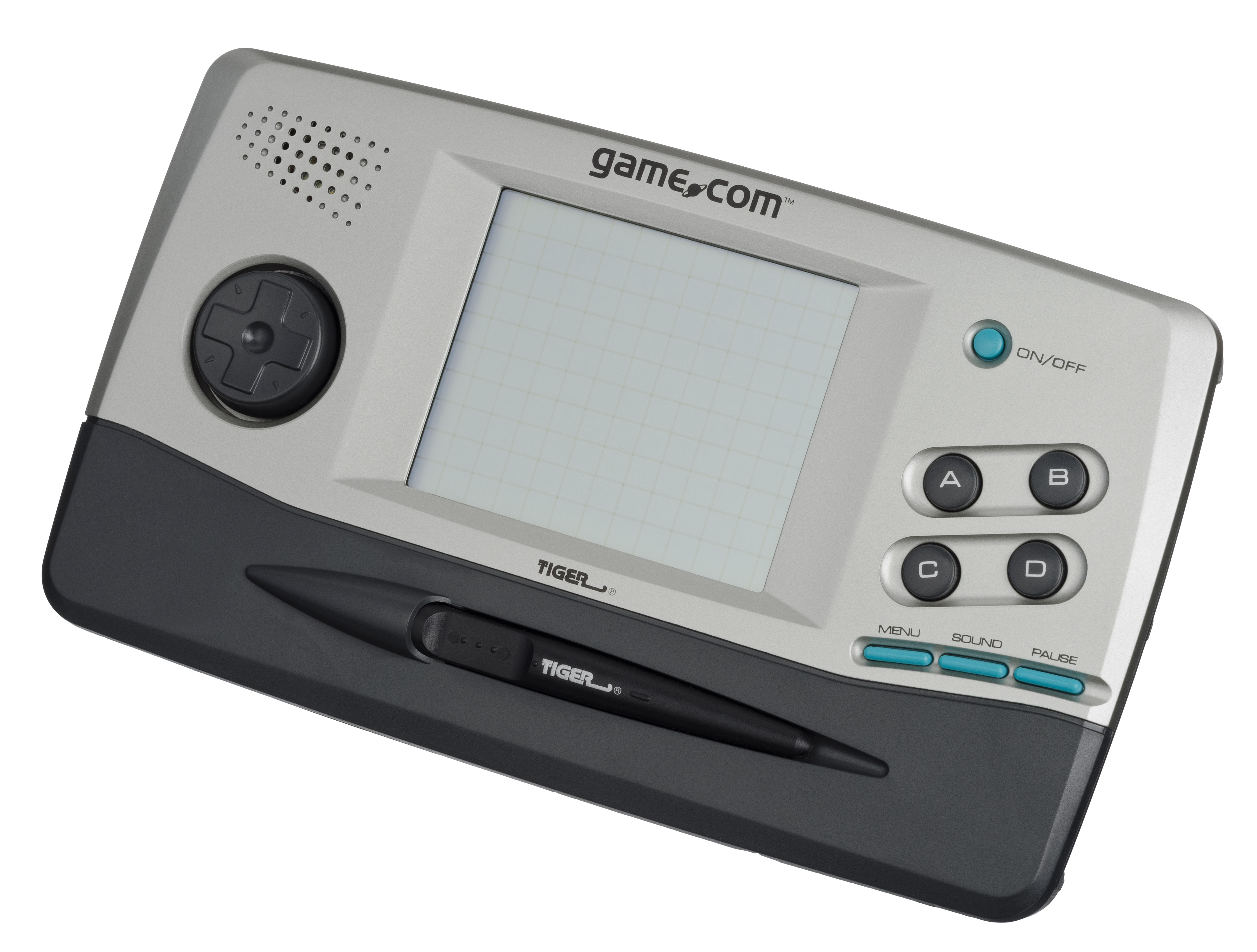 Between the 1970s and 1990s, handheld gaming consoles like the Nintendo Game Boy became more and more complex, but they remained offline experiences. In 1997, Tiger Electronics released Game.com, the first ever handheld gaming device with an internet connection achieved through a special internet cartridge and modem connection. The functionality allowed players to connect to text-based web pages and email clients. 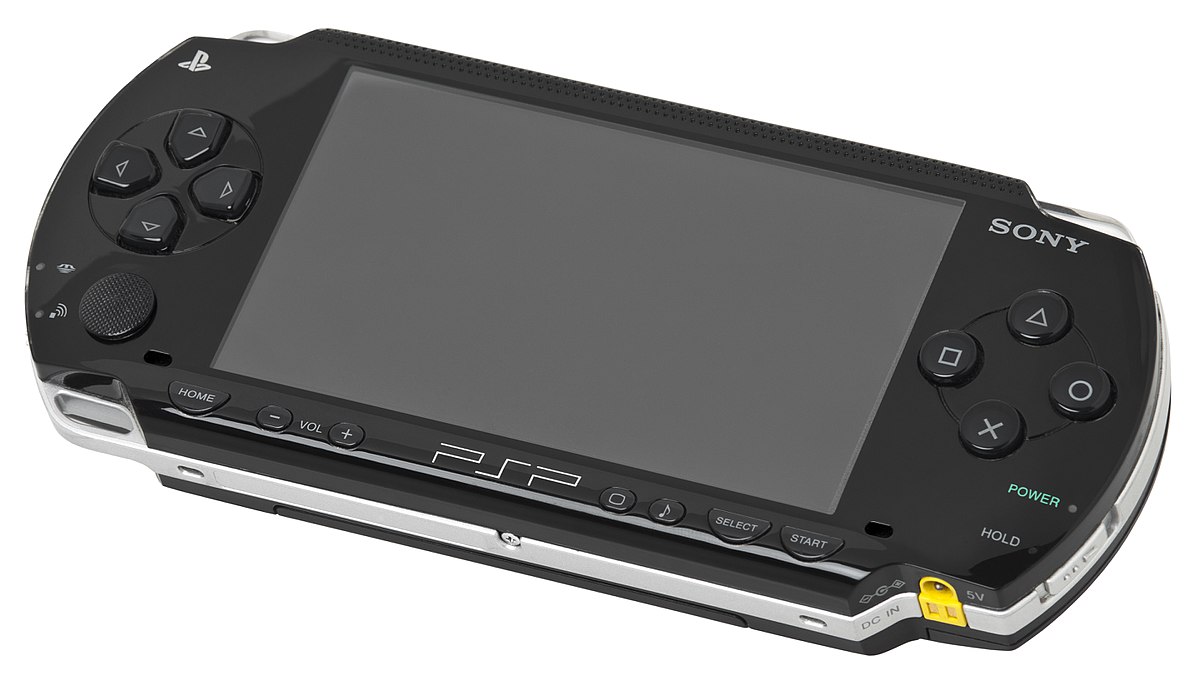 When Sony entered the handheld gaming space, it brought a fully functional web browser to gamers. Though Nintendo’s DS handheld eventually gained an Opera-based browser, it was clumsy and lacked support for Adobe Flash. The PSP, however, gave gamers a taste of what it would be like to bring a desktop internet experience on the road – assuming the availability of Wi-Fi.

At first glance, these milestones in handheld video games may not seem relevant to marketers, but they not only proved the mass appeal of mobile entertainment experiences but also acclimated an entire generation to constant connectivity.

With smartphones, business and entertainment handhelds became one and the same. Users gained the ability to switch between a fun game of Bejeweled and important business emails. Both sides of the coin brought new opportunities to content marketers.

The recent strategy of implementing “microtransactions” within games best exemplifies this crossover and its relevance to marketers. Today, “freemium” games that cost nothing to download but offer players the opportunity to make in-game purchases are common. However, in January 2011, they accounted for only 39 percent of App Store revenue in the entertainment category, according to mobile analytics company Flurry. By June 2011, they accounted for 65 percent of revenue. Recode reported that this figure rose to 92 percent by late 2013. These days, in-game mobile marketing is a foundational aspect of the majority of games released on smartphones.

Here are some other ways that mobile devices have changed how marketers reach their target audiences:

Mobile phone users have been able to opt in to receive marketing communications about new products and services since the early 2000s. When SMS short codes became available in 2003, marketers gained a streamlined channel for quickly engaging qualified leads and soliciting feedback from consumers. 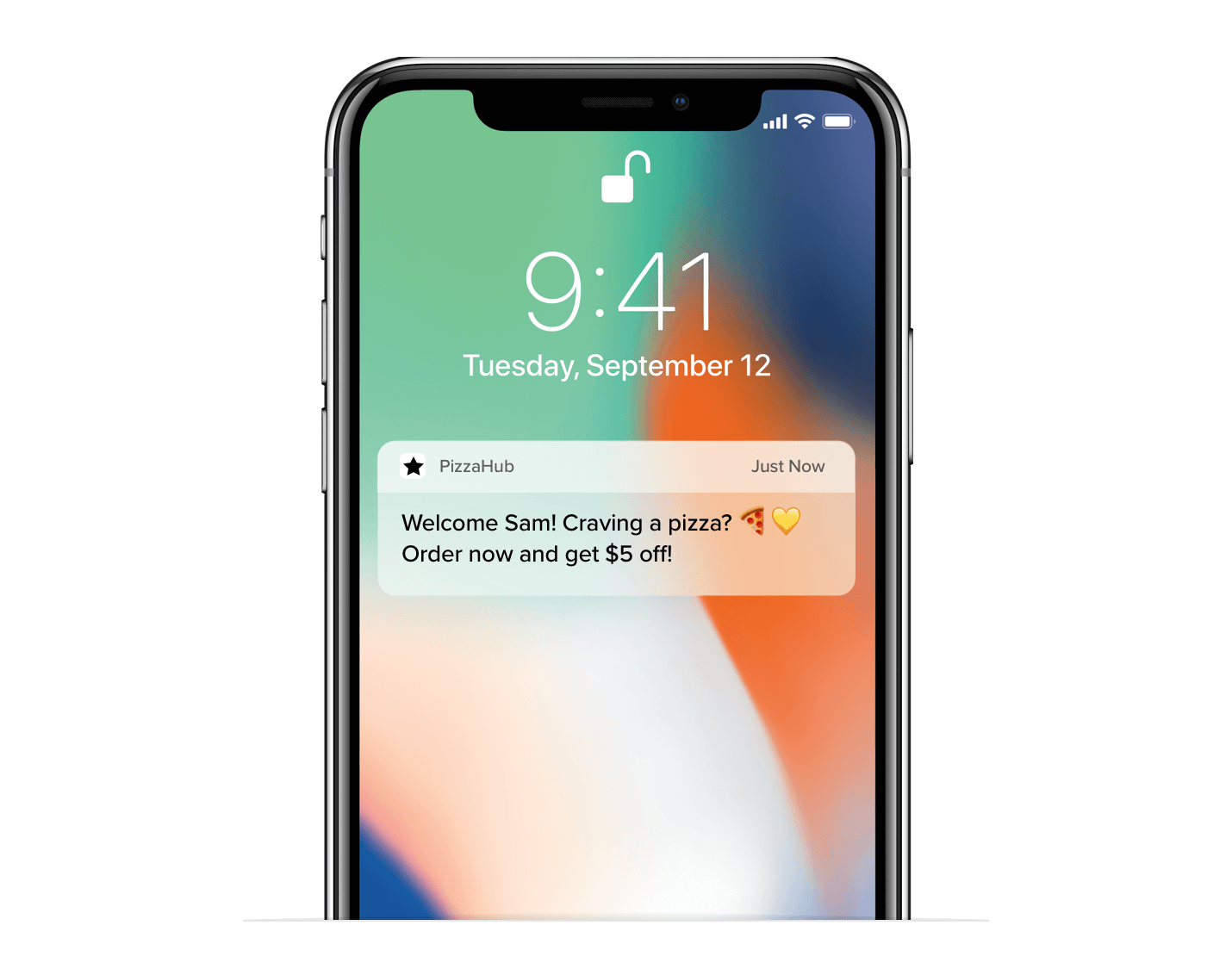 The ability for apps to send notifications directly to a user’s device was pioneered on Blackberry devices and was eventually adopted by Apple in 2009. Today, push notifications give marketers the opportunity to re-engage users who they haven’t interacted with recently, as well as to make announcements about upcoming promotions. 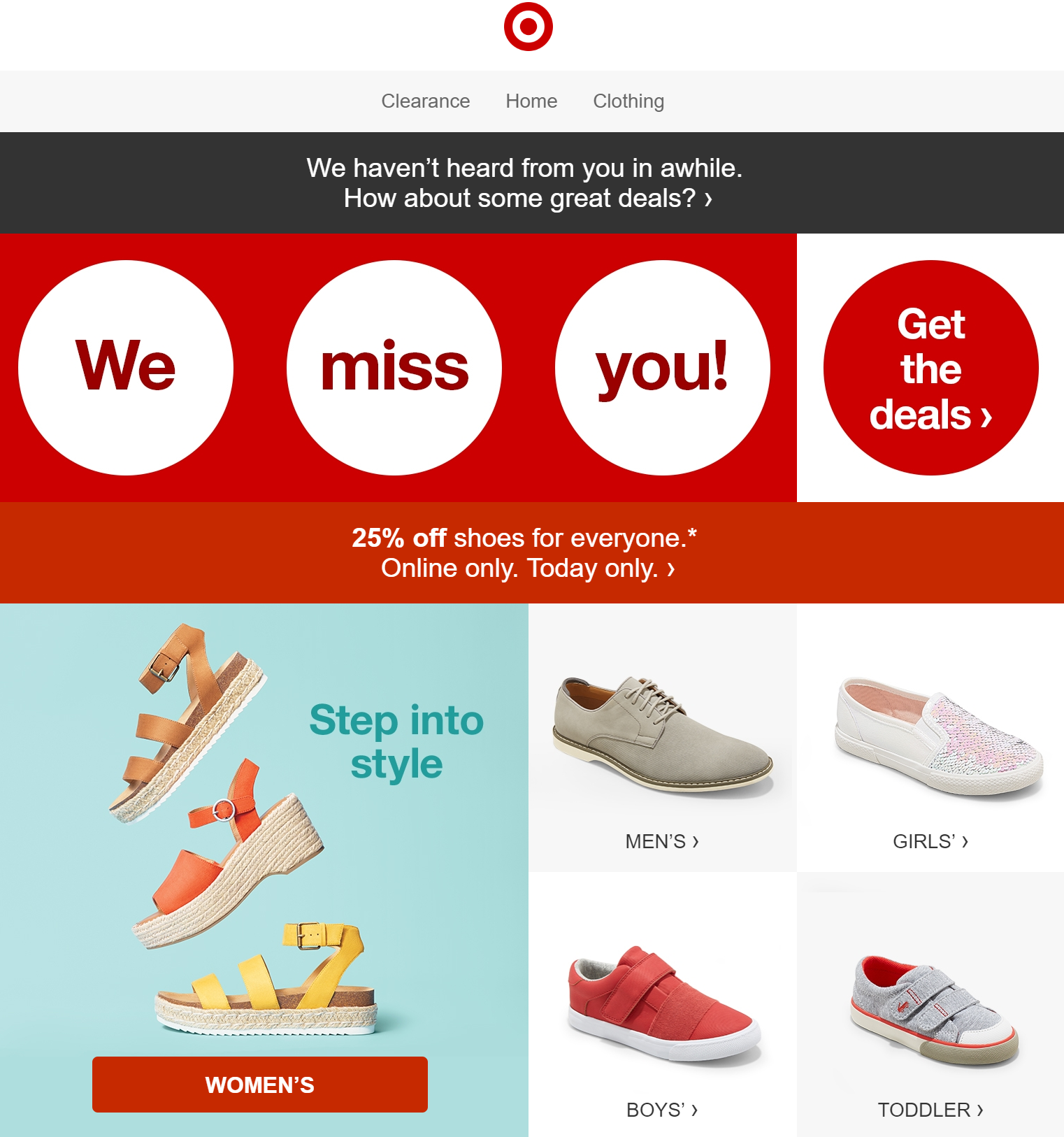 The first email marketing message was sent in 1978 via ARPANET, a precursor to the internet. In 1991, Microsoft’s Hotmail service gave marketers a new platform to reach consumers, and the channel has grown ever since. Today, it’s one of the most important marketing channels available. 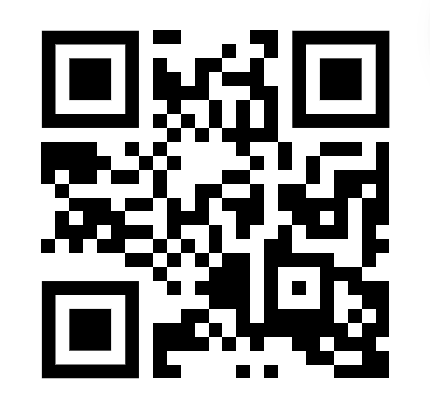 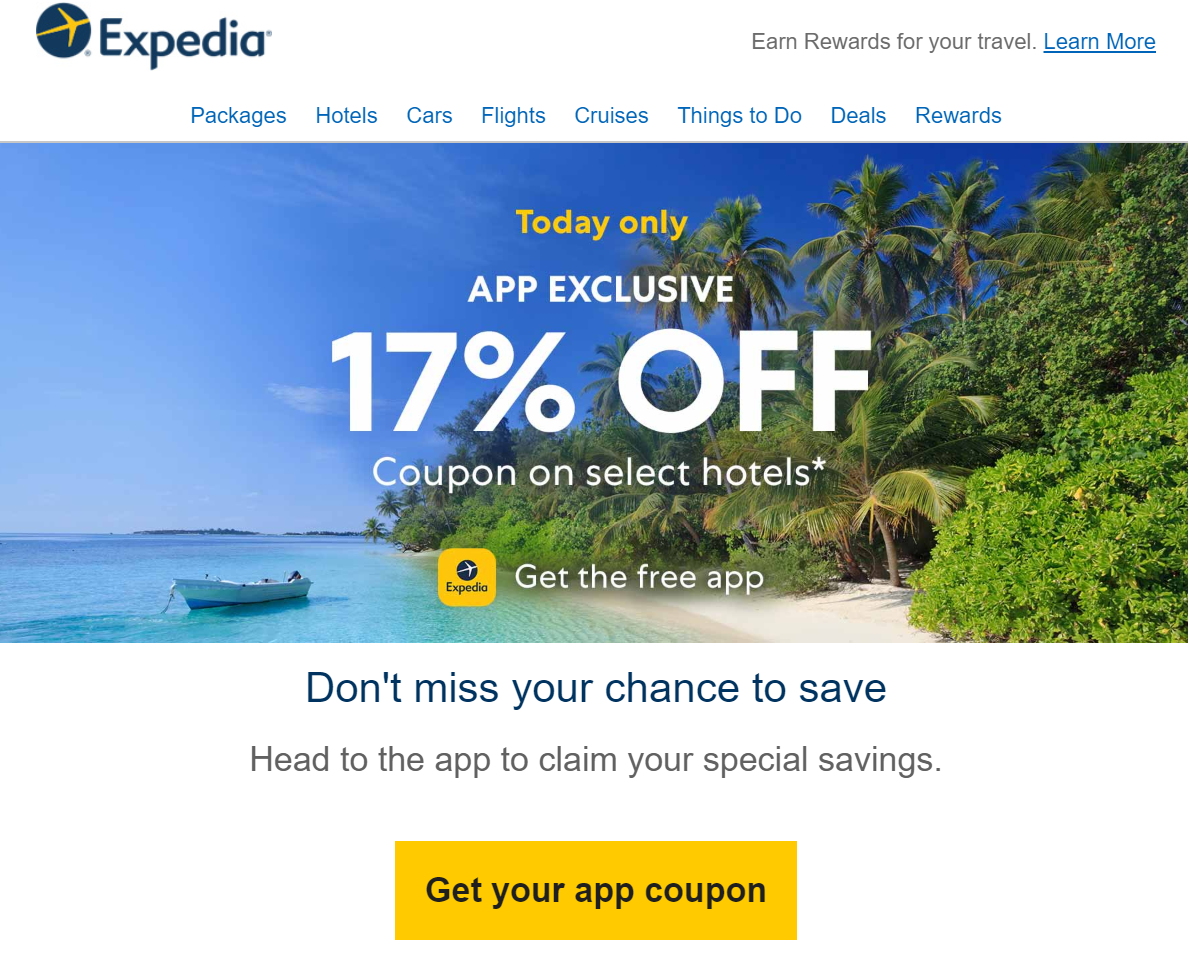 In addition to microtransactions, freemium apps also generate revenue as platforms for distributing display ads like banners. For example, users who download the free version of a game may see ads at the bottom of the screen until they purchase the premium version of the app. Additionally, brands may develop proprietary apps to optimize their ecommerce strategies.

Since the 1970s, handhelds have gotten smaller, more powerful and easier to use. Marketers have leveraged these communication platforms to cultivate new audiences, connect with existing customers and spread brand awareness. In 2019, mobile device optimization is a cornerstone of content marketing, not to mention an essential factor of any B2B marketing strategy.

Whether you’re conducting business on your device after reading this article or you’re about to try for a new high score on your favorite game, take a moment to appreciate the strides mobile technology has made in just a few short decades. I’ll see you out there! (Assuming I’m not looking down at my phone.) 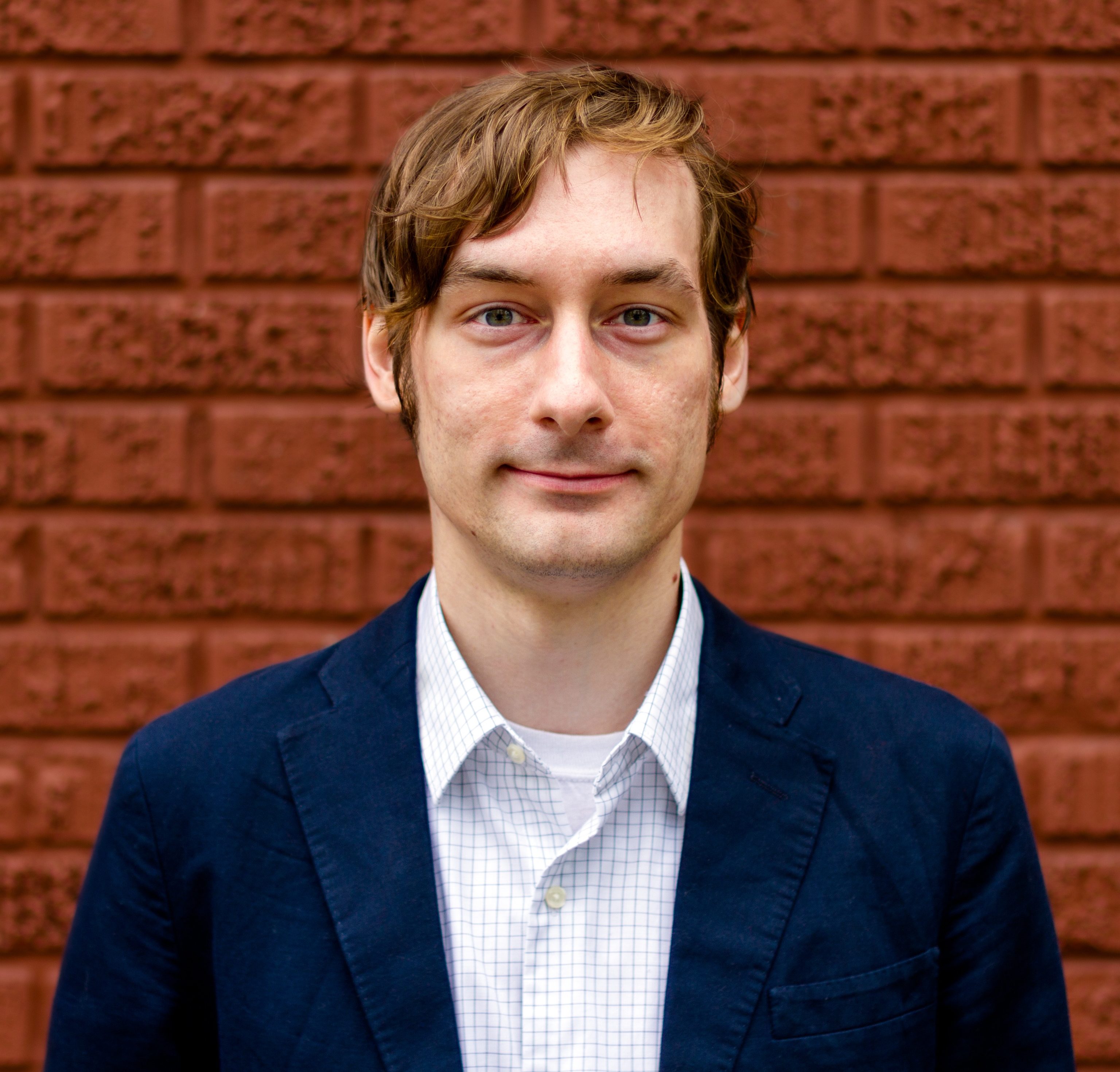 Marketing During A Global Crisis: A 5-Step Guide (Infographic)

Does it feel like you’re walking on eggshells right now? On one hand, you want to keep your job,  because eating and having shelter are good things we all strive […]